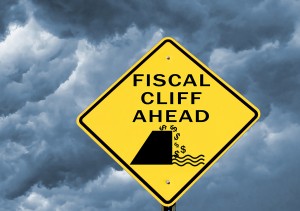 Income tax rates, spending cuts, and debt limits have been the major themes of this battle we call the “Fiscal Cliff Debate.” While so much is at stake in regards to tax rates and the US Federal Deficit, little has been mentioned of estate taxes which are set to change in a big way in 2013. Currently, estate assets valued at $5 million or more are taxed at 35% upon the death of the owner. This rate is poised to jump to 55% on estates value over $1 million. So a $5 million dollar estate that wouldn’t be taxed (due to the exemption) in 2012 may face a $2.2 million tax bill in 2013! Tens of thousands of additional taxpayers would be hit with the tax, commonly referred to as the “death tax.”

See CNBC’s article “ Next Battle on the “Cliffs’ Edge: Estate Taxes ” for more analysis. This debate, unlike others has caused some Democrats to side with Republicans who mostly wish to maintain current rates and exemption. President Obama seems to be split down the middle proposing a 45% rate and a $3.5 million exemption.