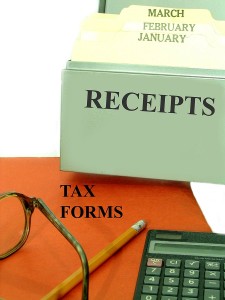 It’s that time of year again. Yes, tis the season for stacking that pile of tax forms on the kitchen counter as they are delivered to your home address, one by one. Any income earned during the tax year that is not reported on a W-2 will more than likely show up on some sort of Form 1099 (1099-INT, 1099-DIV, 1099-MISC, etc.). Both W-2s and 1099s for 2014 should be mailed to you by January 31, 2015. These tax forms are also delivered by the payer to the IRS according to your Social Security number, so they certainly should not be ignored. If income reported on a 1099 to the IRS is not included on your tax return, you’re opening up the door for an IRS audit, or at a minimum, a tax notice.

But what if you are expecting a 1099 that is not received? The IRS would suggest you call the issuer of the 1099 and request a new one. However, Forbes contributor Robert W. Wood suggests otherwise. In his most recent article he says don’t ask about missing 1099s, but do include the income on your tax return. His reasoning for this suggestion is two-fold. First of all, if you request a 1099 from the payer, you run the risk that they complete the form incorrectly which can be a real headache to get resolved. Secondly, if a 1099 really had been issued prior to the January 31 st deadline and sent to the wrong address, a second 1099 may result in the IRS thinking you earned twice the income you really did.

Really it is up to you, the taxpayer, to make the call on whether you wish to request a missing 1099 or not. If you do, just do your best to ensure any 1099s received are correct. Also, make sure to include any income reported on a 1099 on your tax return. No one wants to attract the attention of an IRS auditor. Trying to sort out misunderstandings with the agency can certainly be a time consuming nightmare – especially in a year in which the IRS has already stated they will be answering only half of our phone calls .