It’s Tax Season – Why You Should File Early 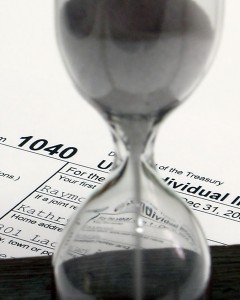 Its hard to believe, but somehow we have already ventured through the holiday season and the new year has begun. That can only mean one thing in our line of work – Its tax season! The IRS recently announced that they will officially begin processing 2013 individual tax returns on January 31, 2014 citing “the annual process for updating IRS systems saw significant delays in October following the 16-day federal government closure”.

Confession time – even though I am in the tax profession, I’m typically a procrastinator when it comes to filing my own tax return. It’s so easy to get wrapped up in filing returns for everyone else that my return usually gets extended on April 15th and filed when things slow down a little in our office. US News and World Report recently released an article citing 5 reasons to file your taxes early . For starters, if you are expecting a refund, you want your money as soon as possible. Common sense. Got it. But be careful not to get over-anxious for your cash. Some tax preparation services offer refund anticipation loans and other such services that can come with high fees and interest rates which can easily take a chunk out of your refund.

Secondly, if you have children in college qualifying for financial aid, you may be required to file your tax return before the financial aid application deadline. If you have a child heading into college for the first time this year and you have not yet dealt with this issue, you might want to look into it as early as possible.

Hopefully you don’t find yourself in this third situation, but feuding ex-spouses often find themselves fighting over who gets to claim the children as dependents on their tax return. The courts usually address this issue in the divorce proceedings, but typically the spouse who claims the child on their return first will get the tax benefits.

The fourth benefit to filing early is a big one, and unfortunately has grown to be a larger issue in recent years. Filing your tax return earlier may lessen your chances of becoming a victim of identity fraud. Several of our clients (and even a couple of our office staff) have gotten ready to file their return in the last couple of years only to have their E-file rejected because a return had already been filed in their name.

Finally, preparing to file your tax return early will give you more time to catch and correct any mistakes you find along the way. You don’t want to wait until the last minute only to realize you are missing necessary paperwork or a document you received is incorrect. Additionally, there have been many changes to the tax code this year. If you have prepared your own return in years past, you don’t want to wait until April 12th to come to the realization that this year’s return is too complicated to handle on your own.

Although there may be several benefits to filing early, be careful not to jump the gun either. Filing too early could result in having to file an amended return later in the year if you find out you didn’t include a necessary item. Also, if you anticipate owing the IRS money this year, remember your payment is not due until April 15th. There is no advantage to handing over your hard earned cash before the required due date.