On June 28, 2012 the United States Supreme Court ruled that the Patient Protection and Affordable Care Act (better know as ObamaCare) was constitutional. Originally argued for months that the new law was “absolutely not a tax increase,” the Supreme Court argued that it was legal under Congress’ taxing authority . So lets address it for what it really is….a massive tax increase.

There are some 20 new or higher taxes under this new law. While many are aimed at higher income taxpayers, some 30% or more of the increases will affect the average working American family . Below is a recap of a few of the new tax law changes. 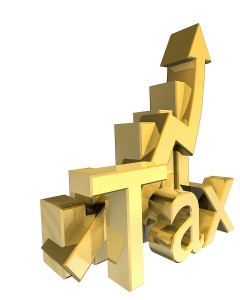 6) Reduction in Medical Expenses Deduction – a deduction is currently allowed for medical expenses that exceed 7.5% of adjusted gross income. The new laws raised that limit to 10%. As an example: suppose you have a working family earning $100,000 a year with $10,000 of unreimbursed medical expenses. Prior to the new law they were able to deduct $2,500 as an itemized deduction. Under ObamaCare, that deduction is now $0.

7) Flexible Spending Account Cap – aka “Special Need Kids Tax” – imposes cap on FSAs of $2,500. There was no cap under prior law. Parents of special needs children often use FSAs to fund special needs education for their children. This new law will be particularly onerous on these families.

These are but a few changes included in the new health care law. We will continue to update you as we become aware of more changes to come.